The temps are getting cooler, but the fishing is getting warmer.

Special thanks to Captain/Guide Jordan Dahl

Smallmouth:
It is like someone flipped a switch. The fish are starting to get into their fall patterns, and the chow is on. We are finding the fish still up on shallow flats (8-14 FOW). The bass bite will continue to improve, as the schools are just starting to form.
The fish are super aggressive, so lure choice has not been a huge deal. Often times they will hit your lure more than once if you miss them on the first strike.
As far as bait selection goes, it really depends on you the angler. Wherever you have confidence in is what’s gonna work I feel. My go to method has been steady retrieving 4″ swim-baits. Some guys like stick baits, some are still drop shotting, and some tossing ned rigs and tubes yet.

The pike bite has been great. There have been a lot of over 40″ pike and a few reports of a 56″ musky on the north end. They have been liking big sucker minnows already but there has been a lot of success trolling. We are finding the pike anywhere from 8-14″ or sometimes deeper, depending on where you’re finding the weeds. If you are casting the same areas there has been success on blades or smaller rubbers.

Crappie:
Not a very common fish for us up here on lake Mille Lacs to speak of, but the bite has been hot, so it’s worth a mention.
I should first mention these fish are NOT lake Mille Lacs fish. These fish were found on around 5-6 local lakes within 25 minutes of Mille Lacs.
The crappies are also in their fall patterns. We are finding them starting to school up and dropping out a bit deeper off the weed edges.

Seasonal tracking of these schools is often a calculated approach. From their spring spawning grounds to your favorite wintering hole these fish simply travel in transitional depths between the two, roaming for small bait fish and bug hatches around various structures until the changing of the season. Right now they are right between your wintering hole, and their spawning grounds.

My favorite lures for these fish are hands down jigging raps. When using jigging raps, you pick the more aggressive fish out of the school (and often times larger). Some guys will use tubes and twisters, but I have always enjoyed jigging raps this time of the year. If you are unable to stay right on top of the school, then sure, troll through the school with tubes and twisters. The majority of these fish were pretty tight to bottom, so getting down to them in 20′ of water is usually the hardest part. 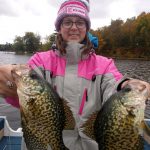 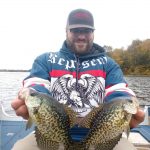 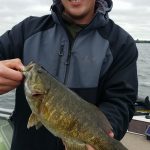 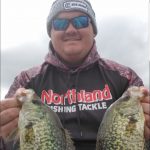 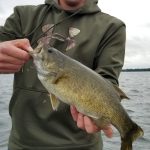 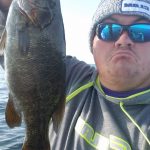 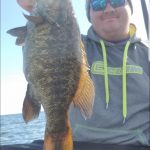 This is some of the best fishing of the year. When fish start to put their fall feed bags on, it sure makes us all look like good fisherman.